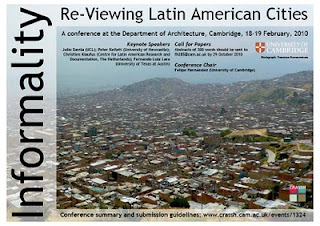 University of Cambridge, UK
17-19 february, 2011.
"The continued study of Latin American cities, their urban heterogeneity and  the size of the territories that they occupy, has led to the development of  alternative strategies to tackle continuous growth. Such strategies deal not  only with the physical expansion of metropolitan areas and the provision of  urban infrastructure (i.e. transport, electricity, water, and sewage), but  also with issues relating to governance and social inclusion. Interventions  are often small in scale but ambitious in scope. They consist of schools,  libraries, nurseries, or transport exchanges which encourage social  interaction and, thus, become generators of future development. [...]
This conference examines different ways to approach and to study urban  informality in architectural, urban and anthropological terms. The speakers, both practitioners and academics, will describe some of the above-mentioned programmes. They will also discuss the  theories and critical methodologies that are currently being used in order  to study urban informality in Latin America (and in other parts of the  world). In so doing, speakers will cast a critical eye to reveal aspects  that require further attention (scholarly as well as in practice)."
Huaycán: A Case Study on Growth of Spontaneous Architecture
Cristina Dreifuss Serrano
The phenomena related to the growth of cities, often linked to massive internal migrations, have a violent impact in many aspects of the established structure. The boundaries of what is urban are blurred and it is frequent that the urban system (transportation, services and housing) does not develop fast enough to give an adequate answer to the needs in the new areas of the city.
Citizens come up with an automatic answer: they become builders of their own city. New environments appear, from architecture without architects, gradually growing from the requirements of its users-inhabitants who also become its constructors. When the economy of the families allows it, the new citizen adds pieces to its house, making it a place for the satisfaction of their desires.
Auto-construction or self made architecture is an informal way of making city, one house and at the time. This fact has been studied from various perspectives (sociological, urban, economic), however there are few studies focusing on architecture as the initial cell of these developments (Burga Bartra 2006, Figari 1987)
Huaycán is an example of such an area. Located in the periphery of Lima, Perú, it was founded in 1984 as a small neighbourhood of houses and public spaces. Whit time, new families have come and old ones have grown. It is possible, thus, to find housing in very early states of development, quarters with well-established constructions although lacking some primary services, and a central area, completely established, with a flourishing commerce activity.
The study, taking place during most of 2010, describes the developing in time of spontaneous architecture, identifying patterns (divided in shapes and systems) and the way they change as the situation of the families allows further construction of their houses.
Autor: Cristina Dreifuss Serrano A las 07:00 No hay comentarios.:

The End of Style
In February 1952 the first nuclear manifesto stated our intention of doing away with the last remaining concessions to academism. Our revolt against the reign of the right angle, against the dominion of the machine and against the glacial geometry of abstraction had found its voice.
And in our experimentations since then we have used every technical resource-going from the tachisme of objective automatism to the graphism [sic], action painting, calligraphying emulsifying, polymaterialism and fiottages of subjective automatism-to finally arrive at the 'heavy water' colours of Baj and Bertini in January 1957.
These technical experimentations have naturally brought their own vocabulary with them: we have gone from 'imaginary spaces' (cf. Pierre Restany) and 'states of matter' (Baj and Dangelo, 1951) to 'prefigurations' (Baj, Dangelo, Colombo and Mariani, 1953), 'new flora' (Dangelo), 'puppets, animals and fable' (Baj and Jorn, 1956) and 'atomized situations' (Baj and Pomodoro, 1957).
But every invention turns into convention: it gets imitated and copied for purely commercial reasons. That is why we must begin a vigorous anti stylistic action in the cause of an eternally 'other' art (cf. Michel Tapie). 'De Stijl' is dead and buried, and it is now up to its opposite-anti style-to break down the last remaining barriers of cliche-ridden convention that official stupidity still dares to oppose against this liberation-that has finally discovered its verbal definition-of art.
Once upon a time Impressionism helped painting get rid of conventional subject-matter; Cubism and Futurism later got rid of the need for the realistic reproduction of objects; and abstraction finally removed the last traces of representational illusion. A new-and final-link today completes this chain: we, nuclear painters, denounce, in order to destroy, the final convention, style. The last stylistic works that we recognize are the 'monochromes' ofYves Klein (1956-1957); only the bare boards-or Capogrossi's rolls of textile can follow them.
Decorators or painters: we have to choose. And we choose to be painters, creating something new and unique every time; painters for whom the virgin canvas is the constantly self-renewing scene for an unpredictable 'commedia dell'arte'.
We state that in a world in which the artifices of celebration are rejected, a work of art should be known by the unity of its character, by the effective influence of its appearance and for the simple reality of its living presence.
Milan, September 1957.
Signed by: Armand, Enrico Baj, Bemporad, Gianni Bertini, Jacques Calonne, Stanley Chapmans, Mario Colucci, Dangelo, Enrico de Miceli, Reinhout D'Haese, Wout Hoeboer, Hundertwasser, Yves Klein, Theodore Koenig, Piero Manzoni, Nando, Joseph Noiret, Arnaldo Pomodoro, Gio Pomodoro, Pierre Restany, Saura, Ettore Sordini, Serge Vandercam, Angelo Verga.
Leonardo, Vol. 3, No. 4 (Oct., 1970), pp. 465-466.
Autor: Cristina Dreifuss Serrano A las 01:01 No hay comentarios.: 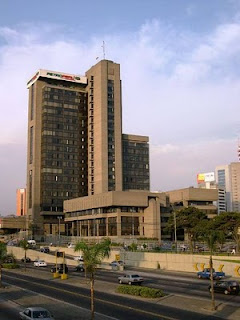